“You can rely on our experience as we are Orthodox ourselves by birth, baptism, in life and practice. We are acknowledged by Orthodox Churches in Australia”.

Our Funeral Home Sydney is truly unique in the sense that to our knowledge and belief, that we are truly one of the very few, which is owned and operated by an Australian Orthodox Family.
We have the knowledge, the ability and experience to arrange a funeral in any of the Orthodox Churches, keeping with the traditions and the relevant customs. 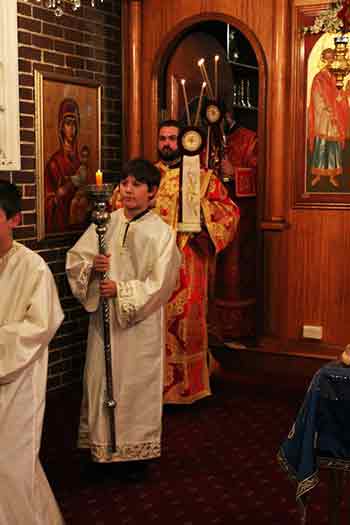 Any parishioner in good standing with the Orthodox Church is entitled to a funeral service. Orthodox Christians who have expressed in their wills the desire to be cremated may not have a funeral in the church.

After a person dies, notify the priest immediately. The Trisagion following a death takes place the night before the funeral at the wake. The prayers intreat God to grant rest to the departed souls and that it may receive mercy. The title “Trisagion” comes from the repetition three times of the opening phrase of the service, “Holy God, Holy Mighty, Holy and Immortal, have mercy on us.”
The Trisagion service (Memorial Service) may be repeated for a loved one in church or at the grave throughout the first year: usually at the fortieth day and one year. 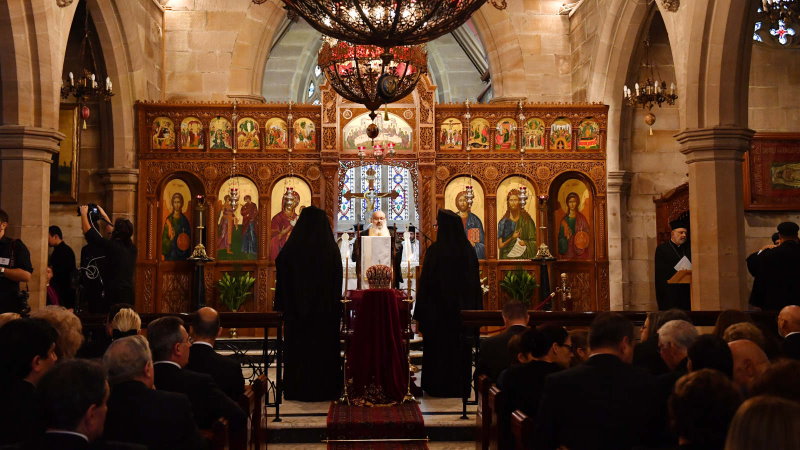 The Orthodox funeral service emphasizes the reality of death and the new life of the deceased. It is a positive service featuring prayers for forgiveness and repose of the departed’s soul.

Priests wear white to symbolize the joy of the resurrection. Funerals take place within the Church and are only allowed at a cemetery or mortuary chapel with special permission.

The deceased and the family arrive at the church where the priest begins the service by meeting the family, friends, and casket at the front door of the church. Chanting, he leads them into the sanctuary for the service. Guests waiting outside enter the church and sign a guest book in the narthex.

The family sits in the front row before the icon of Christ in the iconostasion.

The open casket is arranged so that he eyes of the deceased look east towards the altar, the direction for which Christ will rise again. The priest leads the bereaved in hymns, scripture, readings and prayers, asking God to give rest to the departed soul and forgive all sins. The priest then invites the visitors to “Come and kiss (pay respects) the one that was with us a short time ago.”
To conclude, the priest pours oil and dirt on the body in the form of a cross, saying, “Wash me with hyssop and I shall be pure, cleanse me and I shall be whiter than snow.” The casket is closed and the service ends.

The funeral home transports the deceased and the immediate family to the cemetery. The priest again says the Trisagion service for the last time. Family members may stay and witness the lowering of the casket if they desire.

Mourners share a meal called a “Makaria” to celebrate the life of the deceased. It provides an opportunity for the relatives and friends to refresh themselves and remember their loved one in an informal setting. Traditionally fish is served as a sign of fasting and mourning that the departed has left this life. Paximathia, a dry cookie similar to biscotti, are typically served. Usually small glasses of Metaxa (Greek Whisky) are also made available.
Koliva: The boiled wheat, known as kollyva, is a symbol of the Resurrection. When speaking of the Resurrection, our Lord said: “Unless the grain of wheat falls into the earth and dies, it remains alone, but if it dies it bears much fruit.” (John 12:24) see also the Memorial guidelines. 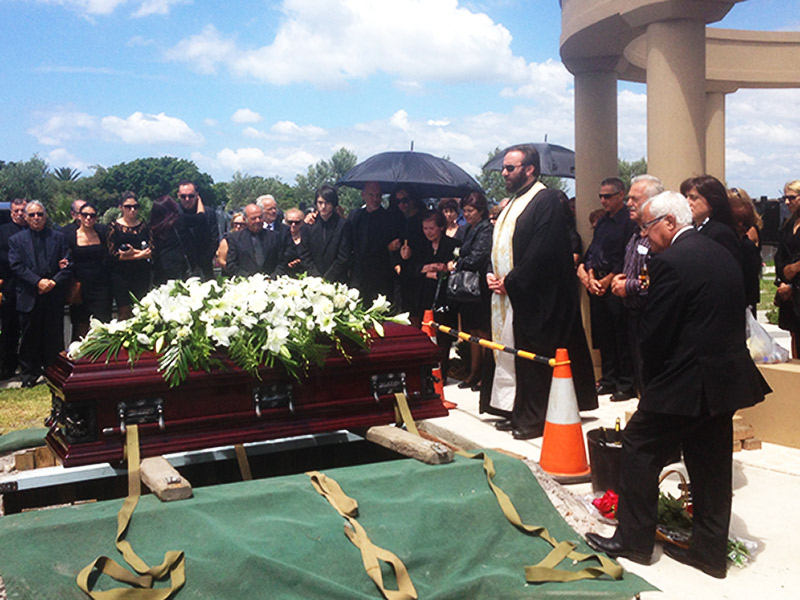 Photos, whether framed or not, of the deceased, are not permitted on the coffin or at the Holy Altar of the Greek Orthodox Churches in Australia. A framed photo of the deceased is allowed either at the front main porch area, or the “Narthix” area of the Church.

Family members are not permitted to deliver eulogies in the Greek Orthodox Churches in Australia, however, should the family wish to do so, they can proceed and prepare a eulogy, the priest will read the prepared eulogy on behalf of the family and at the completion of the Funeral Service.

Because the Orthodox Faith affirms the fundamental goodness of creation, it understands the body to be an integral part of the human person and the temple of the Holy Spirit, and is to share in the resurrection when it reunites with the soul. The Church considers cremation to be the deliberate desecration and destruction of what God has made and ordained for us. The Church does not grant funerals, either in the sanctuary, or at the funeral home, or at any other place, to persons who have chosen to be cremated. Additionally, memorial services with kolyva (boiled wheat) are not allowed in such instances, in as much as the similarity between the “kernel of wheat” and the “body” has been intentionally destroyed.

Although nothing in the Orthodox tradition requires the faithful to donate their organs to others, never the less, this practice is allowed. Permission from the next of kin is always obtained prior to the recovery of organs and tissue. Telling your family now that you want to be an organ and tissue donor is the best way to ensure that your wishes are carried out.

ABOUT THE PROCESS INVOLVED IN TISSUE & ORGAN DONATION

In order for an organ donation to take place the person must be pronounced legally dead. Death of a patient is determined when there is an absence of cardiovascular and respiratory functions or when there is an absence of all brain function, including lack of function of the brain stem. If the tests done in the ICU show brain activity and blood flowing through the brain, the patient is in a coma. But if tests show no brain activity or blood supply, the brain has been destroyed and will never work again. If the tests show the brain is no longer alive, the doctor approaches the family and explains that the patient has died.
The decision to donate a duplicate organ, such as a kidney, while the donor is living, requires much consideration and made in consultation with medical professionals and one’s spiritual father.

Suicide, the taking of one’s own life, is self-murder and as such, a sin. More importantly, it may be evidence of a lack of faith in our loving, forgiving, sustaining God. If a person has committed suicide because of a belief that: such an action is rationally or ethically defensible, the Orthodox Church denies that person a Church funeral, because such beliefs and actions separate a person from the community of faith. The Church shows compassion, however, on those who have taken their own life because of mental illness or severe emotional stress, when a physician can verify a condition of impaired rationality. 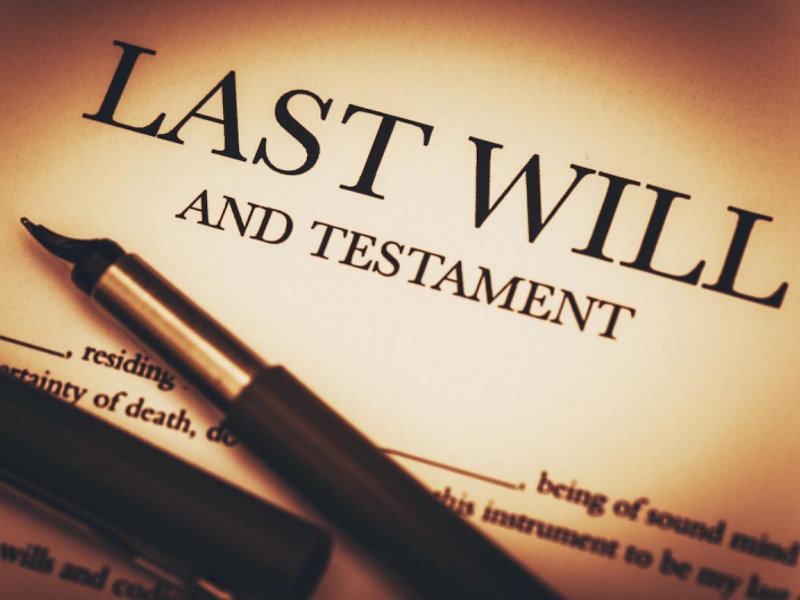 Once you’ve organised your will, you would think there’s nothing else to worry about. However there is just one more thing to consider. A prepaid Funeral. …. 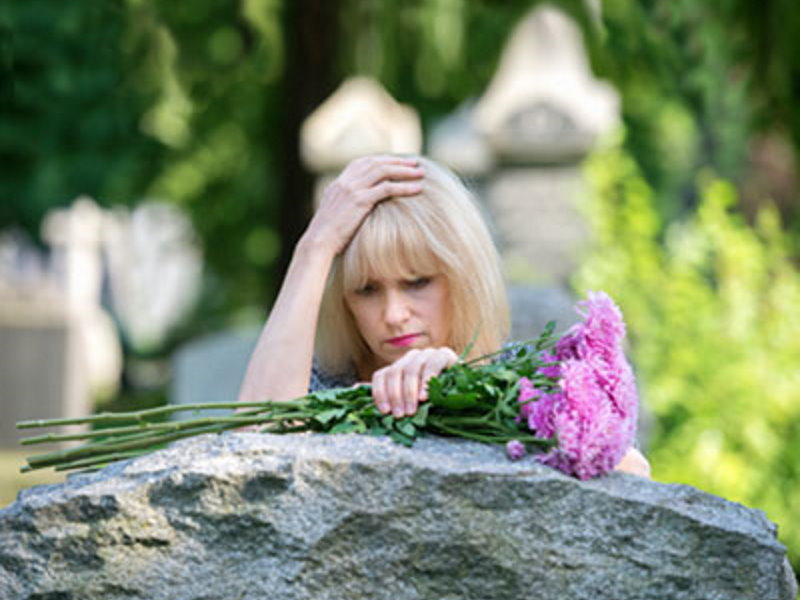 Holding a funeral or memorial service for your loved one is a positive first step in the grieving process. Family members and friends get a chance to say their goodbyes…. 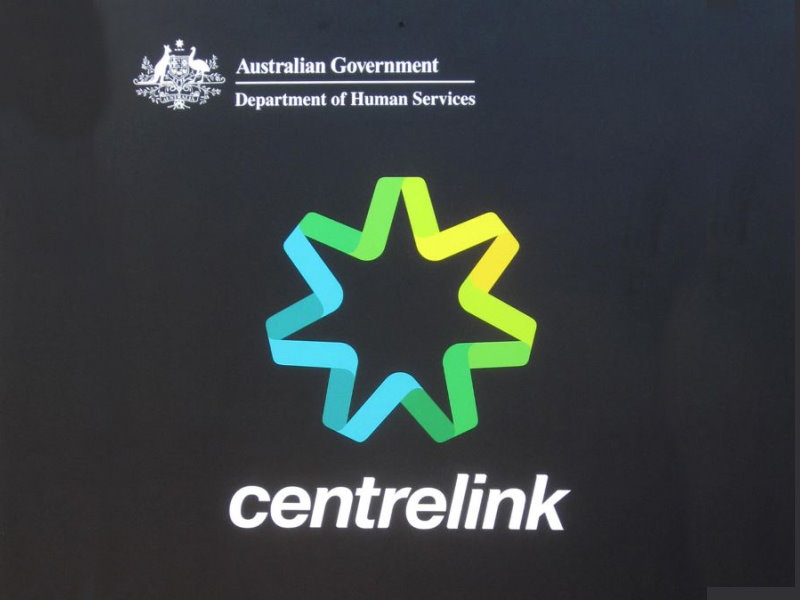 Centrelink have payments, support and other services to help you when someone close to you dies. It can be a difficult time and you may be going through many different emotions.

Guiding Light Funerals, who specialise in Greek Orthodox Funerals, are a multicultural company who conduct services of all religions. Some of the religions we cater for are….